MACAU, Nov. 3, 2017 /PRNewswire/ — Lin Hong Chang, from Taiwan, became the champion of the BPT Main Event on November 1, putting an end to the five day poker tournament organized by Boyaa in Babylon Casino in Macau.

The final table of 2017 BPT started at 1:30 with 9 players coming from Hong Kong, Taiwan, Vietnam, Romania and Mainland China respectively. 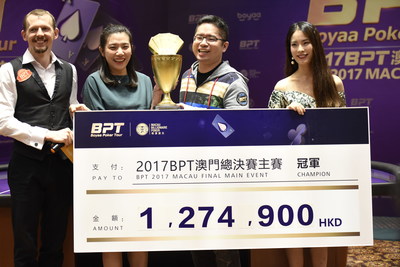 Lin Hong Chang, is an experinced Boyaa player, who has played online Boyaa Poker games to polish his skills. This was his fourth time to attend BPT Main Event, so his happiness doubled because he had been struggling for the main prize for a long time.

The legend continues with higher heights

This BPT has set a new milestone. Including online qualifiers, the Main Event had 745 participants and a total prize pool of 6.7 million HKD. In addition to the Main Event of BPT, 57 sponsored activities were held, that added more colors to the Main Event, such as “No Limit Hold’em”, “Deepstack Turbo” and “Ladies’ Event.”

This time, Boyaa Interactive broadcasted the whole event, along with Dubai TV, Douyu TV, Netease, Lesports, Zhanqi and others. The broadcast was also retransmitted to overseas platforms of Boyaa Interactive, so the players from all over the world could choose the best platform to watch this spectacular event.

Following the conclusion of the main event and the success of the new champion, Main Event of 2017 BPT ended. Boyaa Interactive hopes to see participants in coming BPT.

Doha, Team Qatar has begun intensive preparations ahead of the inaugural edition of the ANOC World Beach Games Qatar 2019 to be held from October 12 -16 in Doha.The international beach multi-sport event is organized by the Association of National Olymp…

Doha-Tennis lovers are in for a splendid time as nine of the World’s top-ten players have confirmed their participation at this year’s Qatar Total Open to be held from March 1 to 6 at the Khalifa International Tennis & Squash Complex in Doha. Except for the World No. 3 and three-time Grand Slam winner, Naomi […]

DOHA, The Qatari swimming team including Mohammad Mahmoud and Ahmad Samarah participated in the second round of the 2019 FINA Marathon Swim World Series held in Seychelles on Sunday.The event featured the participation of 81 swimmers from 19 countries….