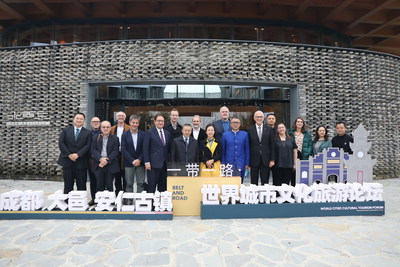 Chair of the Belt and Road World Cities Centre, John Howkins, expressed his gratitude to County Mayor of Dayi County LIAN Hua and Vice General manager of OCT Group Western China QIAO Xiaoyan, for hosting the launch of the centre and supporting its objectives of initiating cultural exchange projects between China and the world. Howkins told the invited guests that the centre’s focus would be to nurture projects which developed forms of ‘applied creativity’ between cities around the worldwide.

The report, which was written by BOP Consulting, focused on trends within cultural tourism and its importance for China’s economic trajectory. It highlighted specific opportunities for, and lessons to be learned from, Anren and Dayi county. The report concluded that Anren is a leading cultural innovator in tourism both domestically and internationally. Anren is a fast-growing tourism destination with renowned Jianchuan museum cluster, the old town, including Liu’s Manor, and multiple projects developed by the OCT group. It is focused on investing in culture to attract domestic and international visitors by balancing authenticity and innovation, and is leading the next phase of the transformation of tourism infrastructure in China.

International experts from London, Barcelona, Quebec City, Rotterdam and Manchester congratulated Fan Jianchuan for his vision in developing the museum cluster. Experts commended the important role the museum had in preserving public memory, and expressed the view that it had significant appeal for international audiences. Denis Ricard, the Secretary General of the World Heritage Cities Organisation said “I have travelled to many cities in the world but I have never seen anything like this museum cluster, you have local authenticity, please do not lose it.”

The delegation toured Anren over a three-day period. The Director of the World Cities Culture Forum stated that Anren is rich in heritage and diversity of experiences, it should invite tourists to consider themselves as temporary citizen in order to preserve local authenticity and support local economy.