NAIROBI, Kenya, May 15, 2019 /PRNewswire/ — On May 13, 2019 at 10:30 am local time, Chinese Ambassador to Kenya Wu Peng met with some members of the Cultural Moutai · Colorful Guizhou delegation led by Kweichow Moutai Group deputy party secretary Wang Yan in Nairobi, during which Mr. Wu was informed that Moutai plans to collaborate with a third-party partner to roll out a series of Moutai liquors in Kenya as part of the company’s program for public welfare. According to the program, five dollars will be donated to the local government for rescuing local wildlife for each bottle of the newly launched product line up sold in the country. 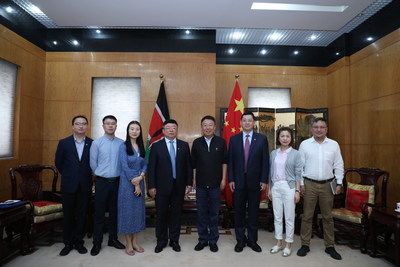 “The philanthropic idea is very compelling and helps to enhance both the national image of China and the corporate image of Chinese firms,” said the ambassador, Mr. Wu.

During his meeting with the delegation, Mr. Wu underlined the fact that Chinese firms have been actively participating in the economic development of Kenya, a country in which Moutai is active in terms of corporate social responsibility, something that is long-term and meaningful.

“As a major Chinese liquor brand, Moutai has played an important role in deepening the friendship between China and foreign countries,” added Mr. Wu. “In Africa, many politicians love Moutai however, we have noted that there are major differences in liquor consumption from one country to another.”

Mr. Wu suggested that Moutai develop a strategy based on the concrete conditions in the African country it plans to expand into.

“Before you arrived in Kenya, I had seen the news that Moutai had held a successful brand marketing campaign in Tanzania.”

Mr. Wu also gave a presentation on the economic and social development of Kenya and proposed several suggestions on how to succeed in the market. In particular, based on the status of the country’s economic development and liquor consumption characteristics, Moutai could consider establishing a business there that goes beyond product sales by developing a more precise strategy for the market or deeply participating in the country’s economic development and investment, Mr. Wu explained.

The deputy party secretary, Mr. Wang, expressed his thanks to Mr. Wu for offering valuable advice to Moutai before giving a presentation on the company’s growth and strategy as well as the background behind their trip to Africa and their reflections on the trip.

“This marks the second time that Moutai has held a large-scale brand marketing campaign in Africa in response to the Chinese government’s Belt and Road (B&R) initiative.”

Mr. Wang noted that by leveraging its strong momentum, Moutai launched the campaign in Africa for the second time in line with the company’s strategic expansion plan, in a move to prepare for its further expansion in the African market and to enhance its global brand influence, laying a sound foundation for the firm’s long-term and sustainable development.

Moutai Group has reached a consensus with local government bodies and corporate partners on the implementation of the company’s plan to donate five dollars to the local government for medical rescue and treatment of wildlife for each bottle of the newly launched series of Moutai liquors sold in the country. The donations will come from retail sales of Moutai’ s local sales partners.

On the afternoon of the same day, an agreement was signed in Nairobi between Moutai and its parties in Kenya. Moutai Group party committee member and deputy general manager Yang Jianjun signed on behalf of Moutai.