LOS ANGELES, May 3, 2019 /PRNewswire/ — The world’s biggest superstar is now becoming the world’s next big superhero! Cristiano Ronaldo, the iconic superstar athlete released his first comic book for “Striker Force 7” as part of “Free Comic Book Day” through comic book retailers across the country this weekend. 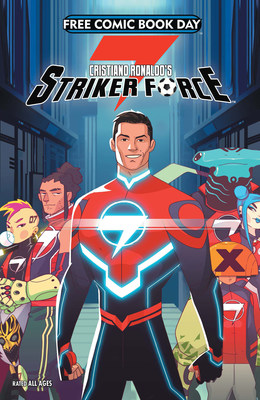 Led by Cristiano, a motley crew of super-powered agents from around the world must protect the Earth from annihilation – provided Cristiano can teach them how to work as a team! They’re here to save the Earth – but who’s going to save them from each other!?

“I have always been a fan of superheroes and I ‘m thrilled to help to create this new animated series,” commented Cristiano Ronaldo. “In the same way football connects cultures and people around the world, I believe great animated characters and heroes can do the same and that’s why I am excited to bring together these passions of football and superheroes through this project and share it with my fans.”

Beyond the Free Comic Book Day special, Cristiano and Devarajan have also closed an 8-territory European publishing deal to launch a series of three original graphic novels based on their characters, with the first book launching later this year.

GRAPHIC INDIA is a character entertainment company focused on creating leading characters, comics and stories through mobile and digital platforms. Through their award-winning creative animation studio in India, Graphic’s mission is to create enduring stories and heroes that foster the imaginations and fuel the inspirations of a new globalized generation of youth around the world. www.graphicindia.com