BAODING, China, Oct. 12, 2022 /PRNewswire/ — On October 10, the latest sales data released by GWM showed that the accumulative number of new energy vehicles sold from January to September reached 96,916, increased by 14.31% year-on-year, marking the brand’s improvement of competitiveness in the new energy market. 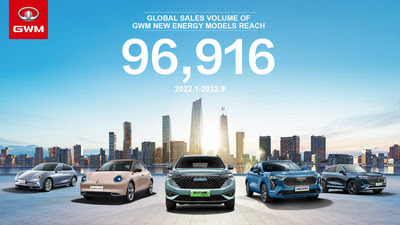 As a single brand, HAVAL has released various hybrid vehicles, among which the H6 PHEV and H6 HEV have outstanding sales performance.

The HAVAL H6 PHEV was officially launched in China and Thailand recently. At the launch in Thailand, the number of orders for this model reached 1,000 within 40 minutes.

The HAVAL H6 PHEV, equipped with a 1.5GDIT engine and an internationally leading 2-Speed Dedicated Hybrid Transmission (DHT), can automatically switch to the most suitable driving mode for a specific driving scenario, such as the electric or hybrid ones while maintaining a balance between power and fuel consumption.

After a test drive, Autohome, a well-known automotive website in China, commented, “The gear shift operation of HAVAL H6 PHEV is very smooth, and there is no feeling of pause or jerk at all. When the vehicle reaches the high-speed range, with the support of the turbocharged engine, there is still a powerful and sustainable acceleration.”

The hybrid edition of HAVAL H6 has been launched in various markets, such as Thailand, Australia, and South Africa, and has achieved excellent market performance.

ORA, a pure electric car brand of GWM, has also achieved excellent sales performance. According to the sales data released by the company, the number of ORA sold globally from January to September this year is 84,721. In Thailand, statistics from Autolife Thailand show that from January to August this year, ORA GOOD CAT (also known as the FUNKY CAT in some overseas markets) ranked first in local EV sales, with a high market share of 42.4%.

WEY COFFEE 01, another new energy vehicle of GWM, was included in the “List of Eligible Electric Vehicles” of the German Federal Office for Economic Affairs and Export Control (BAFA) on October 10. The two versions of the vehicle are priced at 55,900 EUR and 59,900 EUR respectively.

GWM attaches importance to the network security management of vehicles. The ORA FUNKY CAT and WEY COFFEE 01 are in line with UN Regulation No. 155. These two vehicles will soon be available in Europe.

Currently, GWM’s new energy transformation is revving up. The company plans to launch more new energy models with different features in the global market and maintain momentum in sales growth.

Celebrate & Rejoice Chinese New Year with the world, Visit Jiangsu in the Year of Rabbit