BAODING, China, Jan. 28, 2022 /PRNewswire/ — According to GWM’s official data, the global sales of HAVAL H6 reached 370,437 units in 2021, which represents a new milestone for the company sales performance.

HAVAL H6 ranked 7th in the list of the world’s best-selling SUVs in 2021 released by Focus2Move, an internationally renowned market research agency. It was also the only Chinese vehicle model among the top ten. In fact, in the Chinese market, HAVAL H6 has already been the top seller in the SUV segment market for more than 100 months.

Till 2021, this model has iterated to the 3rd Gen HAVAL H6. Based on the L.E.M.O.N. platform, the improved vehicle performs better in three aspects including intelligence, safety and power. 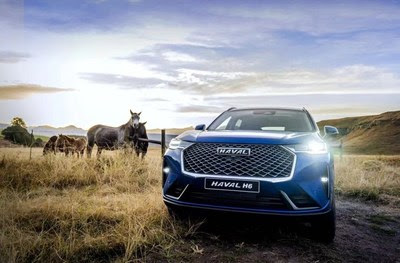 In terms of intelligence, the top configuration of this model can realize automatic parking in various scenarios. Users do not have to worry about parking since the car can automatically complete horizontal, vertical and oblique parking. In some markets, the electric tailgate also has a position memory function that allows for remote opening, making it easy for users to take and place daily supplies.

The intelligent configuration also makes the 3rd Gen HAVAL H6 safer to drive. The latest ESP installed in the model is designed to ease steep slopes and prevent rollover to a certain extent, allowing the car to stay relatively stable even on the snowfield and slippery roads. Also, the 3rd Gen HAVAL H6 has 360 HD panoramic images, providing drivers with all-round images for the car’s surroundings through four-megapixel cameras and ensuring their safety.

In the global market, the 3rd Gen HAVAL H6 is available in either a fuel-powered or hybrid version, offering different performance experience for users worldwide. The former is powered by a 2.0GDIT engine and a 2nd Gen 7DCT wet transmission, which can achieve a maximum power of 150kW and maximum torque of 320N·m, with more power, faster response and lower fuel consumption. The hybrid version, which comes with 1.5T PHEV or HEV system, improves fuel economy while being cleaner and more environmentally friendly.

Currently, HAVAL H6 has been sold in more than 50 countries and regions around the world, including South Africa, Chile, Australia, Saudi Arabia, Russia and Thailand. The model has been well received, especially the upgraded 3rd Gen HAVAL H6 that has been highly praised by authoritative media. The Australian media Carsales considered it “the best Chinese car in Australia to date”. Gabo Baeza, a journalist from Chilean media Rutamotor, believes that it has made a great leap forward in smart technology and overall design, and has greater competitiveness over other brands.

After 10 years of sales since its launch, the HAVAL H6 has won the favor of more than 3.5 million users globally. It will gradually rank among the leading position of the global SUV market and accelerate GWM’s globalization.