DAR ES SALAAM, Tanzania, May 11, 2019 /PRNewswire/ — “Moutai is the best product in China and we all will be the marketing ambassadors of Moutai,” said the former Prime Minister Mizengo Pinda of Tanzania on the evening of May 9 of local time, when he attended the large-scale brand culture promotion activity of “Cultural Moutai•Colorful Guizhou” the “Belt and Road Marching into Tanzania” in the Murimani Convention Centre in Dar es Salaam. 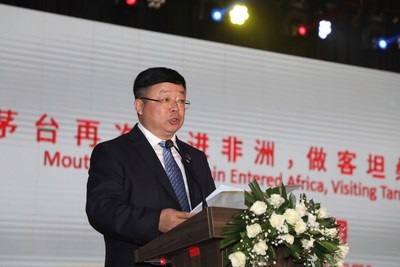 At 18:00 on May 9, the activity was officially started in the most important seaport in East Africa; Cultural Moutai and Colorful Guizhou were hand in hand to present the big show with double themes.

Africa is the only mainland where Moutai held twice high-level brand promotion activities in succession in less than two years.

Moutai officially started to expand and develop in Africa in November 2017. At that time, Li Baofang, the secretary of the party committee of Moutai Group, led the team to successfully hold the large-scale brand promotion activity of “Meet Fragrant Cultural Moutai in Africa” in Capetown.

The senior management of Moutai, such as Li Baofang, all showed in different situations that “we need to follow the big picture for the areas along ‘the Belt and Road’ such as Africa, and we must harvest few years later as long as we insist on.”

This travel in East Africa is a crucial brand promotion activity, aiming at the global market held by Moutai this year, after the South Africa promotion activity in April——Colorful Guizhou and Cultural Moutai light the passion under the line with brand-new creativity.

By report, since Moutai Group spent efforts for creation and development, Moutai and the series already covered 11 countries in the African market from zero. 2019 coincides with the 55th anniversary of the establishment of diplomatic ties between China and Tanzania. The appearance of Moutai struck a chord. 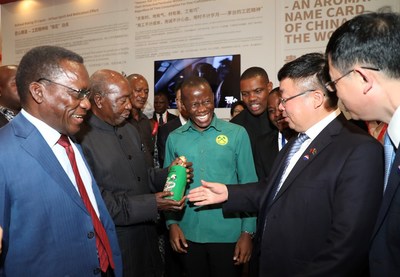 “Tanzania is the warmest and softest land in Africa. We learned that there is a Tazara Railway when we were still children, and we also saw the snow in Kilimanjaro and the lion running on the East Africa prairie from TV,” Wang Yan, the deputy party secretary of Moutai Group, enthusiastically said. “From distant friends to face-to-face cooperation and common growth, nowadays African mainland is beyond the one-way narrative of Hemingway’s time for Moutai people. Beautiful mountains and rivers of Kilimanjaro and the Yunnan-Guizhou Plateau have never been closer than that in today.”

Wang Yan also introduced that with booming tourism, there are also wine and tea and rich natural heritages in Guizhou, the hometown of Moutai, and also the first big data comprehensive experiment zone in China.

Gao Wei, the cultural counsellor of Chinese embassy in Tanzania, highly praised that Moutai chose Tanzania as the core site of second quality promotion in Africa on the 55th anniversary of the establishment of diplomatic ties between China and Tanzania. 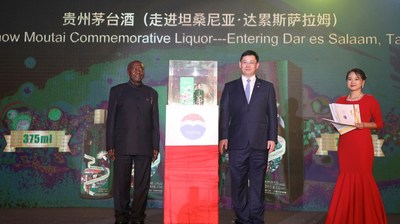 In the party, Yang Jianjun, member of the party committee and deputy general manager of Moutai Group, led all participants in a toast and celebrated meeting fragrant Moutai in Africa again. The elaborate Moutai wine tasting video was played synchronously on the big screen to let the guests know more about Chinese wine culture, and singers from Moutai Art Group performed folk songs and dances, integrating natural instincts of singing and dancing between African and Guizhou natives.

Followed by that, a group of African models wearing cheongsams of different colors, holding classical Moutai, including Aged Moutai, Kweichow Moutai, Five-star Moutai, as well as Chinese Zodiac Moutai, stepped toward the main platform, and the rich product design philosophy of Moutai was amazed.

Nathan Tibaigana, a Moutai fen from Tanzania, tasted Moutai on the scene for the first time, and “lovely,” he said in excitement. Comparing the cocktail modulated from Moutai, Nathan Tibaigana preferred drinking Moutai directly, because it is more aromatic and tastes mellower.