SÃO PAULO, Aug. 2, 2019 /PRNewswire/ — On July 20, Kion Cosmetics, cosmetics line of Brazilian company Brazilian Kimberlite Clay, took The Winner 2019 Trophy Awards prize for technological innovation and excellence in natural and vegan cosmetics, at the Castle Hotel and Spa, in Tarrytown, New York, USA. The prize was awarded by International Business Magazine. With high performance formulation, all of the brand’s lines are developed with rare clay and natural vegan products not tested on animals. 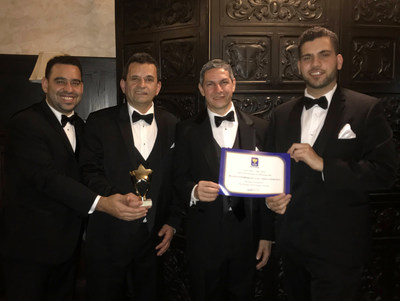 In addition to recognizing the excellence of Kion Cosmetics, this award is one of great importance, because it helps to expand the name of the brand, opening doors for new business in the international market,” says Urandir Fernandes de Oliveira, President of BKC, noting that the line has a wide variety of facial, body and hair products, with innovative technology that is effective in treating wrinkles, lightening, cleansing, hydration and measurement reduction.

Founded three years ago, the company has caught the notice of multinationals in the premium sector and has started to sell in the world’s key commercial centers, such as London, Dubai, New York and Beverly Hills. “Before we actually get started with large scale production, we begin to introduce Kion products at international fairs, and the level of acceptance has been so high, we were exporting before we got to commercialization in Brazil,” explains Luciano Didier, Director of Development of International Business.

The focus for this year is on Asian markets, such as China and Thailand, as well as expansion in the United States. In Brazil, the plan is to open some 60 kiosks and shops in the country’s main shopping centers. Products can also be purchased via e-commerce at kioncosmetics.com, in Portuguese, English, French and Spanish, or via telemarketing (+55 11 25770275).

The primary raw material used in Kion products is red Brazilian kimberlite clay, which is considered rare because it was formed more than 850 million years ago and has more than 130 cosmetic and pharmaceutical applications. Classified as the most powerful element for rejuvenation of the skin, this clay is extracted in Corguinho, Mato Grosso do Sul, in Brazil.

“The efficacy of the crystals and the mineralogical power of the clay has been proven by the Kosmoscience laboratory in Brazil, and Bureau Veritas in Canada,” explains executive director, Alan Oliveira.

Kion Cosmetics participates in the industry’s leading international fairs, such as In-Cosmetics, Cosmoprof and Expocosmética, among others. Specialized publications such as Glamour UK, Harper’s Bazaar, Vogue Russia and Cosmetics Design have already recognized the brand’s unique properties.

GUANGZHOU, China, June 24, 2019 /PRNewswire/ — GAC Motor has been active in global market lately, launching several new models in the Middle East, opening four dealer stores in Ecuador, and preparing for the launch of the GS8 in the Russian market later this year. “GAC Motor is committed to realizing a global brand presence […]

XUZHOU, China, March 2, 2021 /PRNewswire/ — Leading construction machinery manufacturer XCMG (000425.SZ) has sailed off more than 400 units of construction machinery equipment on February 18 from China, which will be arriving in countries of the Belt and Road Initiative (BRI) including Southeast Asian countries and Russia shortly. This batch export included products of various […]