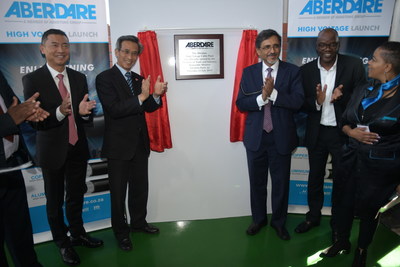 The total investment of the project was more than ZAR 135 million. This investment expands the product portfolio of Aberdare Cables from the current level of 33kV to a new product offering of up to 132 kV. The new production line is already set for full production capacity, making Aberdare the third African company capable of producing high-voltage cables.

On the day of the ceremony, guests included Mr. Ebrahim Patel, Minister of Trade and Industry and Economic Development of South Africa; Ambassador Lin Songtian of the Embassy of the People’s Republic of China to the Republic of South Africa; Mr Fikile Majola, Deputy Minister of Trade and Industry; Mr. Mlungisi Mvoko, Eastern Cape MEC for Finance and Economic Development; and Mr. Mongameli Bobani, Executive Mayor of the Nelson Mandela Bay Metro. Together with customers, partners and media, more than 140 people were in attendance. The launch of the high-voltage cable manufacturing plant is an important step towards Hengtong’s further internationalization and in direct response to South African President Cyril Ramaphosa’s campaign to attract investment.

Dr. Song Haiyan, Aberdare CEO, expressed his heartfelt thanks to all the distinguished guests and media friends for attending. He shared that Hengtong’s investment will bring more employment opportunities to local young people and women. In the HV projects, more than 50% of the R135m is spent on locally procured goods, and most of the raw materials will be also be procured locally. He pointed out that Aberdare would adopt a new model to carry out its business, and would work closely with EPC Contractors, Accessories Suppliers and Testing Parties.

In the speech of Mr. Ebrahim Patel, he mentioned that the investment of Hengtong has brought new employment opportunities to South Africa. At the same time, he responded to President Cyril Ramaphosa’s localization requirements and confirmed the President’s assertion that South Africa has a strong attraction for foreign investment.

“Wealth and jobs are created by expanding productive capacity. The government will deploy industrial policy measures to support manufacturers, as that opens economic opportunities for the industry and for the country at large,” Patel said.