ADEN, Yemen, March 21, 2020 /PRNewswire/ — In the temporary capital of Aden, the Saudi Development and Reconstruction Program for Yemen (SDRPY) has launched a cleaning, beautification and environmental sanitation campaign, using heavy equipment donated by the program, to collect and remove up to 9,000 cubic meters of accumulated waste from streets and public areas. This campaign will last for three months and will also include planting new greenery, erasing graffiti and repairing streetlights throughout the city. 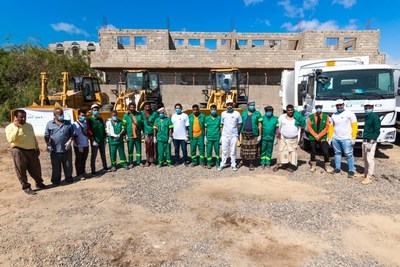 The hygiene and environmental sanitation campaign aims to improve urban character and reduce health risks from environmental and visual pollution. It will also contribute to raising the level of performance of the Cleaning and Improvement Fund in Aden (CIFA), providing more advanced and higher quality services to Yemeni citizens. Working in partnership with CIFA, the program will cover 10 neighborhoods in 8 districts: Sheikh Othman, Mansoura (Abdel Aziz and Cairo), Dar Saad, Buraiqeh (Inma and Al Shaab), Khormaksar, Al Mualla, Tawahi and the Crater District.

The campaign was launched in the presence of the governor of Aden, Ahmed Salem Rabeea, and the head of the SDRPY delegation, Engineer Mohammed bin Abdullah Al Hadi. During the inauguration, a memorandum of joint cooperation was signed between SDRPY and CIFA to contribute to improving and developing Aden.

Governor Rabeea affirmed that the support of SDRPY is continuous and without limitation, adding that the campaign would contribute to curbing the spread of epidemics and diseases. The governor explained that the equipment received by the governorate was part of a comprehensive set of deliveries that would arrive consecutively to support the sanitation sector, noting that the very modern and advanced nature of the equipment and machinery received. 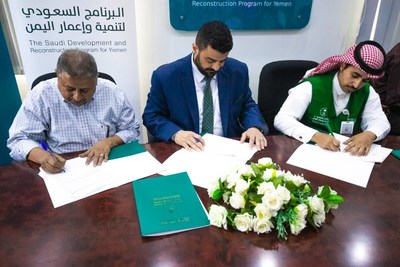 The SDRPY delegation head, Eng. Al Hadi, said during the campaign launch that he on a mission of continuous support from the government of the Custodian of the Two Holy Mosques King Salman bin Abdulaziz Al Saud for the brotherly people of the Republic of Yemen, and to fulfill the program’s plan to support vital sectors in Yemen, raising efficiency and enhancing capacity, including concern for the environment. In launching the campaign, the program seeks to activate environmental sanitation in cooperation with CIFA by providing essential support in the form of equipment and machinery, in addition to afforestation and rehabilitation of vital roads in Aden to maintain the cleanliness of the province and increase awareness of achievements for the health of the members of the community.

According to Eng. Al Hadi, the campaign is taking place within the context of the development program in Yemen, as an extension of the projects that have received attention, and as an embodiment of the deep relationship between the two countries. In realization of common faith and destiny, the Kingdom is lending a helping hand to the brothers and sisters in Yemen according to a strategy and vision concerned first and foremost with the Yemeni individual, addressing his or her needs for services, reducing the unemployment rate among Yemenis, mobilizing the economy, and stabilizing the Yemeni currency.

Al Hadi expressed great happiness at the hospitality and welcome that the members of SDRPY received from the local authorities and people of Aden Governorate, as well as in the various Yemeni governorates in which the program operates to implement development projects to help strengthen the basic services provided to the Yemeni citizen. The head of the Saudi delegation stated that SDRPY had been active during the past few months in Aden assessing needs and explained that a number of new projects would be announced in various sectors.

As well as critical knowledge and skills, SDRPY has provided the campaign with more than 22 pieces of heavy equipment and machinery – including bulldozers and garbage trucks, as well as over 200 rubbish bins. The project has also created valuable temporary job opportunities for more than 300 citizens, working alongside 12 field monitors, 80 participants from civil society organizations, and 40 individuals from local farms. Everyone involved will receive daily rewards for their direct actions throughout the duration of the campaign.

The work of the sanitation and hygiene teams has been divided into several areas based on the location of accumulated waste, which will be removed in more than 600 transfers per month for three months in the various districts of the province.

The campaign was launched from Sheikh Othman district, and the cleaning process will be carried out according to a pre-agreed timetable over the 9 days of activity scheduled for each district.

Across the full duration of the campaign, it is expected that in excess of 9,000 cubic meters of waste will be collected and removed from across the governorate. The campaign includes a number of programs and accompanying events, including beautification of the districts by planting 500 non-water-consuming seedlings. This effort is designed to support the principle of sustainability in the districts targeted. In addition, work will also be done to repair and replace the lighting on a number of vital roads in Aden.

It should be noted that the hygiene and environmental sanitation campaign was enacted after CIFA lost nearly 60% of its machinery and equipment, resulting in the accumulation of large quantities of solid and dirt waste scattered across the neighborhoods and streets of the governorate. This has led to an increased risk of disease and epidemics in an already delicate situation.

UAE expresses condolences and solidarity to Iran over the earthquake victims

The UAE has expressed its sincere condolences and solidarity with the Islamic Republic of Iran over the earthquake that struck the south of the country, and caused dozens of casualties. The Ministry of Foreign Affairs and International Cooperation (MoF…

The field hospital established by the UAE in areas affected by the earthquake in Afghanistan began operating after being equipped with specialized medical staff, equipment, and supplies.UAE President His Highness Sheikh Mohamed bin Zayed Al Nahyan issu…

The UAE has sent three planes carrying a 1,000 sqm field hospital, which includes 75 beds and two operating rooms equipped with the latest medical supplies and devices, to offer relief to earthquake victims in Afghanistan.This comes within the continuo…