ADEN, Yemen, April 9, 2020 /PRNewswire/ — The Saudi Development and Reconstruction Program for Yemen (SDRPY) is continuing its efforts in the “Beautiful Aden” campaign for cleaning and environmental sanitation, which has now entered its second week and is scheduled to continue for another three months, covering a total of 8 districts in the temporary capital of Aden. The campaign has performed extremely well, removing 2,857 cubic meters of accumulated waste from the streets and roads in over 100 different work areas. 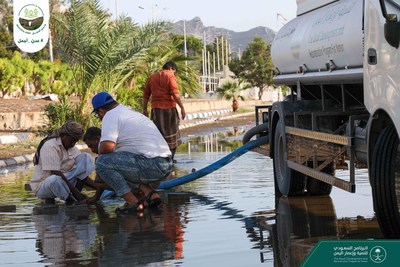 Over 130,000 of Aden’s citizens are now benefiting from cleaner, better looking and more hygienic homes. In 17 days, the campaign’s teams of workers have also removed 9,744 cubic meters of waste in the Buraiqah District, exceeding the 90-day target of 9,000 cubic meters.

In its second week, the “Beautiful Aden” campaign targeted the Sheikh Othman and Tawahi Districts, collecting and removing accumulated trash and garbage deposits, clearing rainwater, and addressing damage from torrential rains. These rains have caused the closure of some main streets and parts of popular neighborhoods, as well as forcing citizens to move. In total, the teams have cleared 625,000 liters of floodwater from the recent storms and downpours out of the streets of Aden. In keeping with SDRPYs objectives, 30,000 liters of water were then used to irrigate the trees planted during the beautification phase of work. 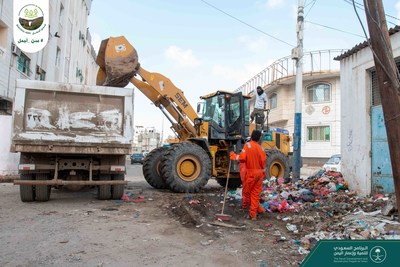 Despite the accumulation of residual waste and garbage across large areas of the governorate, SDRPY has managed to remove more than 1,026 tons of waste through 129 individual transfers, while the program’s equipment and machinery have travelled nearly 5,000 km in carrying out their work.

SDRPY’s equipment and work teams are operating alongside colleagues from the Cleaning and Improvement Fund of Aden in order to achieve all the campaign’s objectives, and to restore beauty and health to Aden. The campaign is chiefly concerned with contributing to the preservation of the general health of Yemeni citizens by preventing the spread of epidemics and diseases, while the campaign teams are continuing to take important health precautions by wearing gloves and masks to protect workers and participants in the campaign. 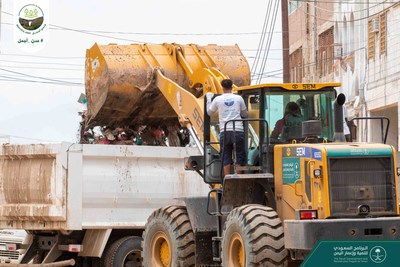 The campaign teams will be working alongside the Cleaning and Improvement Fund of Aden to restore the aesthetic character of the city and remove the impact of visual pollution such as damage and graffiti in neighbourhoods and roads. Over a period of three months, this work will target 10 neighborhoods in 8 districts, namely: Sheikh Othman, Mansoura (Abdel Aziz), Mansoura (Cairo), Dar Saad, Inma (Buraiqah), Al Shaab (Buraiqah), Khormaksar, Al-Mualla, Tawahi and the Crater District. In total, more than 300 participants have taken part in the “Beautiful Aden” campaign so far, including 12 field monitors, 80 participants from civic organizations, and 40 members of farms and farming associations.

“Beautiful Aden” also includes an afforestation and beautification campaign, which includes the planting of 5,000 seedlings and will contribute to highlighting the beauty of the city and nature by improving the urban landscape, as well as to purifying the atmosphere. The trees will naturally increase oxygen in the local atmosphere, contributing to improvements in weather and climate.

Finally, the campaign is renovating and lighting a number of vital roads in Aden, enhancing the use of natural energy sources and raising the efficiency of energy consumption. This project will also stimulate commercial traffic, improve the urban landscape, contribute to enhancing local security, and reduce traffic accidents.