HONG KONG, March 16, 2020 /PRNewswire/ — Global premier mobile phone brand TECNO Mobile (www.TECNO-mobile.com) is changing the world of smartphone cameras in emerging markets once again with the upcoming launch of its smartphone CAMON 15 series. It is said that CAMON 15 series camera will be supported by the cutting-edge SONY chip, which is recognized as the leader in this industry.

The launch will be one small step for the CAMON 15 series, and one giant leap for TECNO – TECNO CAMON 15 shall be the first smartphone armed with the cutting-edge SONY Chip unveiled in the African market, and the CAMON 15 series camera’s high definition technology will enter a new phase. 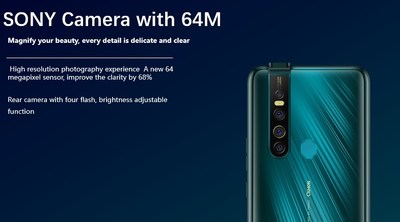 With superior design specifications as well as exquisite sensor technological capacity, the SONY chip provides strong support to the camera’s performance, e.g., one of the most striking benefits of Sony’s chip on the camera is how much detail it can pack into each facet of photography, rendering minute details at the pixel-level. The picture quality is much better than other chips with the same pixel, and details are clearly represented. Even a dark portrait is bright and clear.

While taking a photo with a smartphone equipped with a SONY chip, even after zooming in to the extreme, every detail is perfectly captured and shown. Click the digital shutter to capture beautiful views and unforgettable memories, and you will find that every detail is displayed purely and clearly. Think sweeping evening landscapes with still-life detail you can zoom right into, and you are starting to get the picture.

Recently, some global technology media forecasted the smartphone technology innovation in the 2020s and which stated that increasing quantities of megapixels is going to be the key trend in 2020s. Smartphone users have an insatiable appetite for high quantities of pixels and the manufacturers are trying their best to figure out ways to improve pixel performance in order to meet people’s growing needs. Undoubtedly, TECNO Mobile is on the right path with this innovation.

Sources even say the new TECNO CAMON 15 series might be equipped with a whopping 64 megapixels for the ultimate high definition photography experience. Once released, it will be the first phone in Africa to run on the SONY chip, a great breakthrough for the smartphone industry in Africa. 64 megapixels would be another huge breakthrough in smartphone pixel technology.