NEW YORK, March 1, 2022 /PRNewswire/ — Today, Pepsi® unveils its annual global football campaign, building upon the brand’s continued premiere partnership with the UEFA Champions League. “Stay Thirsty” leads with a high-energy creative directed by Ernest Desumbila, Barcelona’s multi award-winning filmmaker, celebrating the changemakers driving football’s present and future – on and off the pitch. In true Pepsi style, the campaign features a world-class player line-up, an infectious music track, and members of the “Pepsi Collective,” a curated group of vibrant up-and-coming talent from around the globe. 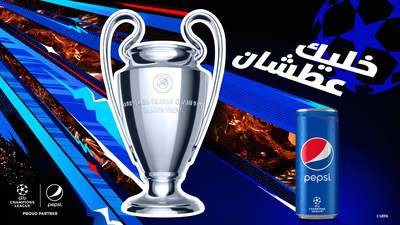 It wouldn’t be a Pepsi campaign without an attention-grabbing track as the brand continues to create innovative music on a global scale. This year, Pepsi partnered with hip-hop and R&B icon Montell Jordan for a refreshed take of his 90s classic, ‘This Is How We Do It.’ The reimagined song, ‘Mama I Made It (How We Do It),’ pairs artist Say Mo‘s vocals alongside Jordan and was produced exclusively for the Pepsi “Stay Thirsty” campaign by Grammy-winning female duo Nova Wav and Sean Douglas.

“Stay Thirsty” leverages its global scale to introduce the world to ambitious creatives with unique talent and inspiring stories, with purposeful intent to drive those with equal passion that anything is within reach. The “Pepsi Collective” members each play a role in the campaign and include:

–  forward-thinking fashion designer Nithsaya, who was enlisted to reimagine the iconic Pepsi football jersey; and

–  Dubai-based graphic designer Dina Sami who created supporting bespoke graphics and visuals, including a striking mural that appears in the ad.

“Pepsi is the entertainment beat of football. We champion talent both on and off the pitch, always looking to bring unique, exciting campaigns that the world loves to see and be part of,” said Pepsi Senior Director, Global Marketing, Michael Walford. “This year, we’re recognizing the beautiful game as it is today – from the iconic to the up & coming – celebrating how everyone is building the game together.”

The campaign was teased earlier this month when Messi and Ronaldinho posted themselves playing a game of ‘Pepsi Pong’. Fans all over the world were quickly abuzz when it dropped, confirming Ronaldinho’s return to Pepsi and showing the dynamic duo on the same team once again.

Throughout the “Stay Thirsty” campaign, the brand will look to inspire the next generation of football talent and cultural pioneers through the Pepsi athletes’ and Collective’s personal past, present and future stories and ambitions shared in a digital content series. With Pepsi also partnering with British fashion designer Liam Hodges to create a limited-edition capsule collection inspired by the brand’s rich football heritage and this year’s future-thinking campaign to go on sale in Spring 2022.

Join the conversation online with #STAYTHIRSTY.

Athlete Supporting Statements:
Leo Messi: “It’s always great to be back with the Pepsi team. Pepsi is a brand that celebrates doing things in your own way, and that is something that has always resonated with me. This year is no different and I am personally inspired to share the message that it doesn’t matter who you are or where you are from or how crazy your dream is. You have to go after it with passion and dedication to achieve everything you want.”

Paul Pogba: “Every year these campaigns get bigger and better, and this year it’s all about inspiring the next generation and changemakers in the game – on and off the pitch. It was great to work with the passionate and inspired Pepsi Collective members.”

Lucy Bronze: “I’m so excited to be joining the Pepsi team and appearing alongside so many iconic players and inspiring people impacting the game. The energy on set was amazing, and I hope fans enjoy the campaign and its message to reach for the top.”

Ronaldinho: “I am so happy to be back in a Pepsi jersey again! I love that this campaign is all about inspiring the next generation of football talent and playing the passion forward.”

About PepsiCo
PepsiCo products are enjoyed by consumers more than one billion times a day in more than 200 countries and territories around the world. PepsiCo generated more than $79 billion in net revenue in 2021, driven by a complementary beverage and convenient foods portfolio that includes Lay’s, Doritos, Cheetos, Gatorade, Pepsi-Cola, Mountain Dew, Quaker, and SodaStream. PepsiCo’s product portfolio includes a wide range of enjoyable foods and beverages, including many iconic brands that generate more than $1 billion each in estimated annual retail sales.

Guiding PepsiCo is our vision to Be the Global Leader in Beverages and Convenient Foods by Winning with PepsiCo Positive (pep+). pep+ is our strategic end-to-end transformation that puts sustainability at the center of how we will create value and growth by operating within planetary boundaries and inspiring positive change for planet and people. For more information, visit www.pepsico.com.

DINA SAMI
Dina is a Palestinian/American illustrator who was born and raised in Dubai. She founded her design company Seven Minutes, and from visual arts to graphic design, has gained worldwide traction for her work telling stories through art. She’s also an avid football fan, having played recreationally for years.

IQRA ISMAIL
Iqra became a football coach at 15, with a desire to create safe, female-only environments that weren’t available to her. She is currently the Director of Women’s Football at grassroots club Hilltop FC, and the first-ever and current captain of the Somali Women’s National Football Team. She is the youngest Football Black List Winner of 2019, which she won at just 19 years old.

LIAM HODGES
Liam Hodges is a luxury streetwear brand. Founded by London-based Liam Hodges in 2013, the eponymous brand is built on the concept of serving a generation born online in their own definition of the aspirational and successful. Signature Liam Hodges fuses influences from modern subcultures and postmodernism with innovative streetwear designs. Upcycled materials and environmental awareness are now at the forefront of Liam Hodges design, continually working to create less waste and review old habits.

MEL D COLE
Mel D. Cole is a world-renowned, award-winning photographer who is best known for his hip hop, press/editorial photography. He is the founder of Charcoal Pitch FC, the first and only Black-owned, soccer specific photography agency dedicated to creatively exploring soccer visually and educationally through a multiracial lens. With a career spanning almost 20 years, he released his first coffee table book chronicling his hip hop photography in February 2020. Starting in April 2021, he focused his lens on documenting the pandemic, and then in May 2021, the Black Lives Matter movement in the U.S. He released his second book, Mel D. Cole: American Protest: Photographs 2020–2021, in November 2021.

MONTELL JORDAN
Montell Jordan is an American singer, songwriter and producer. His first single, “This Is How We Do It,” was a no. 1 hit in 1995. Montell has written and produced for music artists including Christina Milian and Sisqó, and his influence in music and culture has seen him feature in films and documentaries including ‘The Fighting Temptations’ and ‘Standing In the Shadows of Motown.’

NOVA WAV
Grammy Award-winning female production and songwriting duo Nova Wav have penned words and beats for the likes of Beyonce, Jay-Z and Rihanna to name a few. Composed of Brittany “Chi” Coney and Denisia “Blu June” Andrews, the American duo have successfully cemented their roles in the music industry with their passion and creativity.

PALOMA PUJOL MAYO
Madrid-based Paloma is the #1 freestyler in Spain. Growing up in Mexico, she wasn’t allowed to play with the boys teams, so she donned a fake name (Javi) to be able to play. She’s won the Spanish national freestyle championships twice and has been the world Footbag champ six times. She is also an advocate for LGBTQ+ rights and equality.

SAY MO
Say Mo is a Kazakh music artist whose love of dance and performance has drawn a huge following on TikTok, appealing to Gen-Z audiences across the globe since her debut on the 2019 Russian vocal talent show ‘Pesni.’

SEAN DOUGLAS
Sean Douglas is a Grammy Award-winning American songwriter and record producer. He has written for a range of musicians, including Madonna, Selena Gomez and Nick Jonas.