WASHINGTON, Nov. 18, 2021 /PRNewswire/ — Affirming a historic initiative to advance inclusive development for youth of all abilities, the Stavros Niarchos Foundation (SNF) has awarded Special Olympics $8,500,000 USD to launch the Global Campaign for Inclusion in support of individuals with intellectual disabilities. This partnership will elevate awareness of the transformative power of Special Olympics’ inclusive programming worldwide and empower youth to help drive a global policy effort to support inclusion in schools and communities.

“We are honored to gain the continued support of the Stavros Niarchos Foundation to bring to the world a Global Campaign for Inclusion that rejects and counters the divisive words of political extremes. The Special Olympics’ message of inclusion is one of acceptance of difference that touches hundreds of millions of children and youth around the world,” said Tim Shriver, Chair of the Special Olympics International Board of Directors. “Our athletes and the youth of today have voices that deserve consideration. Their message is apolitical, non-polarizing—it is one of solidarity, unity and hope that will see us through this divisive time in human history.”

This new three-year grant will build on SNF’s support since 1998 by expanding Special Olympics’ Unified Schools program, which embeds inclusive sports and inclusive youth leadership in school settings. The expansion will reach almost 3,000 schools in 22 countries. In addition, the grant will launch both a robust thought leadership campaign on the theme of inclusion as well as the creation of the first-ever Global Coalition for Inclusion and Education, a coalition of national governments, United Nations agencies, foreign aid agencies and Foundations whose aim it is to strengthen social inclusion globally through education.

“SNF seeks to support lasting social change for the better, and Special Olympics has a proven record of helping create permanent shifts in mindset that ripple outward from individuals to schools, families, communities, and nations,” said SNF Co-President Andreas Dracopoulos. “Committed and energized young people of all abilities are showing us the way to a more inclusive future. SNF is proud to be part of the effort to amplify their voices while delivering key services in schools worldwide.”

Through Play Unified: Learn Unified, Special Olympics and SNF have transformed school settings into communities of acceptance and inclusion. Since 2018, Play Unified: Learn Unified has reached over 190,000 youth with and without intellectual disabilities in 14 countries, generating evidence that Unified Schools programming is a powerful tool for fostering inclusive mindsets and behaviors: 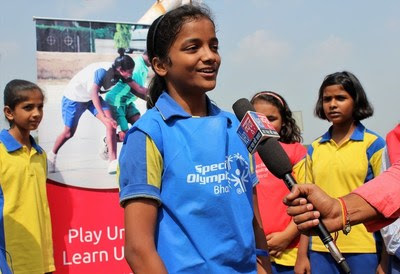 Building off the success of Play Unified: Learn Unified, Special Olympics and SNF will launch the Global Campaign for Inclusion, elevating a youth-led message of inclusion to the thought leaders who shape mainstream public discourse and convene a Global Leadership Coalition for Education and Inclusion, propelling more communities toward a shared commitment to inclusion and the celebration of our common humanity.

Founded in 1968, Special Olympics is a global movement to end discrimination against people with intellectual disabilities. We foster acceptance of all people through the power of sport and programming in education, health, and leadership. With more than six million athletes and Unified Sports partners in over 201 countries and territories and more than one million coaches and volunteers, Special Olympics delivers more than 30 Olympic-type sports and over 100,000 games and competitions in a typical year. Engage with us on: Twitter, Facebook, YouTube, Instagram, LinkedIn and our blog on Medium. Learn more at www.SpecialOlympics.org.

About the Stavros Niarchos Foundation

The Stavros Niarchos Foundation (SNF) is one of the world’s leading private, international philanthropic organizations, making grants to nonprofit organizations in the areas of arts and culture, education, health and sports, and social welfare SNF funds organizations and projects worldwide that aim to achieve a broad, lasting, and positive impact for society at large, and exhibit strong leadership and sound management. The Foundation also supports projects that facilitate the formation of public-private partnerships as an effective means for serving public welfare. Since 1996, the Foundation has committed more than $3.2 billion through over 5,000 grants to nonprofit organizations in more than 135 countries around the world. See more at SNF.org.

Celebrate & Rejoice Chinese New Year with the world, Visit Jiangsu in the Year of Rabbit