As an octa-core Intel Airmont SoC designed for LTE smartphones, SC9853I is Spreadtrum and Intel’s joint innovation product targeting to mid-range and high-level smartphone market. Based on Intel’s 14nm FinFET process technology, SC9853I is affordable, power-efficient and its performance prevails over its competitors due to x86’s performance-oriented structure. 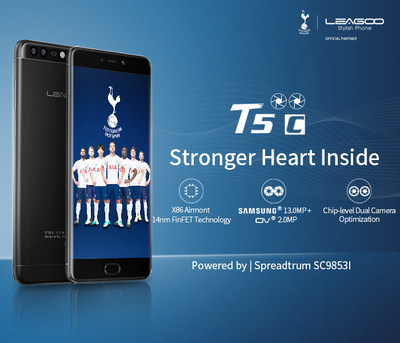 In 2017, Spreadtrum, the leading fabless semiconductor company got listed as one of the top three global chipmakers in terms of market shares, only after Qualcomm and MediaTek. Now the Shanghai-based emerging tech giant plans to surpass MediaTek on mid-range mobile industry and is trying to catch up with Qualcomm in the high-level smartphone market. And their latest initiative, SC9853I echoes the same.

Spreadtrum, which is already working with various global brands, has been very meticulous or even picky to select its first SC9853I smartphone partner because its ambition has little tolerance for business mistakes. What Spreadtrum really wanted was a smartphone manufacturer with reliable products and global footprints to penetrate in the world mobile market. And LEAGOO emerged as a preferred choice for Spreadtrum.

Speaking of LEAGOO, if you are a football fan of Premiere League, you must be familiar with this brand name because LEAGOO is the world’s third company sponsoring top Europe football team (Tottenham Hotspur), only after OPPO (FC Barcelona) and TECNO (Manchester City).

Statistically, LEAGOO has 160,000m2 of factory area, over 5,000 employees, 50 factory assembling lines and a production capacity of more than 20 million smartphones per year.

LEAGOO’s next target is focused on the $100-$120 smartphones, and aims to exploit the mid-range and entry-level handset markets to the fullest. With that said, LEAGOO seems to be ready to use high-spec hardware even on its mid-range and entry-level smartphones. And choosing Spreadtrum SC9853I for its latest product – LEAGOO T5c, a mid-range smartphone with high-spec performance is a testimony of the same. Being the first global smartphone manufacturer to use Spreadtrum SC9853I, LEAGOO appears to be confident that the future mid-range and budget phones can be even more available with improved performance. Let’s wait and see if T5c will make that happen.

Doha, October 03 (QNA) – In line with the global observance of World Heart Day 2012, Qatar Petroleum’s Medical Services Department has organised a variety of activities to spread information on cardiovascular diseases and to conduct heart health scr…