DAR ES SALAAM, Tanzania, May 11, 2019 /PRNewswire/ — On May 8 at 8:30 am local time, a team led by Kweichow Moutai Group deputy party secretary Wang Yan, leader of the Cultural Moutai – Colorful Guizhou Belt and Road (B&R) Journey – Walking into Tanzania delegation, visited the University of Dar es Salaam (UDSM) in Tanzania. “The memorandum of understanding on cultural exchanges signed today will lay a solid foundation for future cooperation in personnel training, academic exchanges and resource sharing, build a bridge for communications and exchanges between the two regions, and bring about more positive information and opportunities,” Wang said in his speech. 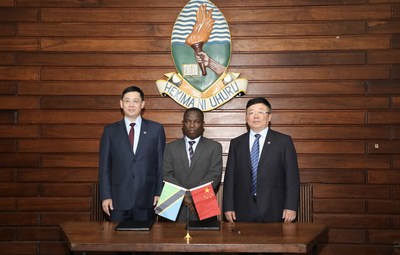 The visit to UDSM was the first action taken by the Cultural Moutai – Colorful Guizhou B&R Journey – Walking into Tanzania delegation, and the MOU represented the first time that Moutai has established a partnership with a major university in Africa.

The starting point for cooperation in several fields

“This is the starting point for our future cooperation encompassing many different fields. We can learn a lot from you, and both of us can achieve good outcomes,” Prof. William Anangisye spoke highly of the MOU with Moutai during his speech.

He said that the signing of the MOU was also the starting point for UDSM to engage in talent development. “Our professors and teachers will visit and learn from Moutai, and we also welcome the students and teachers of Moutai Institute to come here and engage in exchanges with us.”

As the only comprehensive university in Tanzania, UDSM has cultivated many top-notch talents that have gone on to make contributions in Tanzania and throughout East Africa. It is not only the largest and oldest public university in Tanzania, but also has, in recent years, served as a bridge for cultural exchanges between China and Tanzania. The university’s China Research Center has played an active role in promoting Sino-Tanzanian and Sino-African cooperation.

Moutai Institute, established by Moutai Group, is China’s first undergraduate institution that trains application-oriented professionals for the alcoholic beverage brewing industry chain and serves as the group’s key talent pool. The institute has established seven departments centered around the brewing process, including brewing engineering as well as food science and engineering, providing 14 undergraduate degree programs with a focus on all aspects of brewing engineering, viticulture and wine engineering.

Facilitating the open communications between the peoples of the world through cooperation in education is one of the key missions advocated by the Chinese government’s Belt and Road (B&R) initiative. The MOU reflects Moutai Group and UDSM’s ongoing commitment to the memorandum between China and Tanzania for joint participation in the initiative, and their shared vision of building an educational community under the B&R framework by strengthening the collaboration and exchanges between as well as the mutual benefits for educational institutions in the two countries.

According to the MOU, UDSM and Moutai Group will strengthen and expand their exchanges and collaborative efforts with similar groups and organizations in terms of education, culture, talent training and tourism. In addition, the MOU provides Moutai Group with an opportunity to build and deepen its exchanges and collaborative ties with other organizations.

With the partnership, both parties will improve the quality of their academic exchanges by sharing expertise in theory, technology, teaching and practical training with a focus on brewing, among other disciplines, as well as organizing academic discussions and exchange visits. Kweichow Moutai plans provide the two countries with an access to talent exchanges through the Confucius Institute at UDSM.

During his speech, Mr. Wang invited the faculty and outstanding students to visit the Moutai facility in a move to further the exchanges.

He indicated that Moutai, an iconic Chinese liquor maker with products available across the globe, is facilitating the B&R initiative by opening new locations in overseas markets and expanding exports, in addition to increasing investment and imports as well as providing local job opportunities and adding to the tax revenues in several countries around the world.

He said that Moutai has made several contributions to public welfare, providing educational assistance and supporting poverty relief programs in China, as well as assisting in the construction of a primary school in Mozambique and establishing the Moutai Scholarship program in Australia.

UDSM Confucius Institute co-president Liu Yan commented, “Moutai is an iconic Chinese company with a global reputation as well as a long-established symbol of national culture. We believe the partnership between Moutai Group and one of the best universities in Tanzania will prove to be a success and open up new opportunities and possibilities for talent exchanges between the two countries.” UDSM welcomes Moutai Institute to join the list of exchange programs and partnerships between Chinese and Tanzanian institutions.