SHENZHEN, China, May 18, 2022 /PRNewswire/ — Blackview, a premium Chinese smart device company mainly devoted to rugged lifestyle experiences and military-grade smartphones, has recently launched several products in the Middle East, including Iran, Saudi Arabia, Iraq, and Kuwait, among many others. 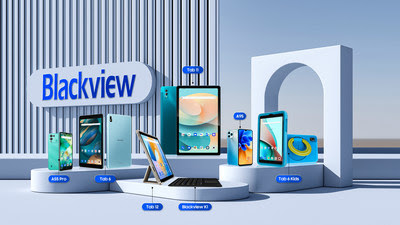 Blackview has always been committed to reaching more global smartphone users and the launch of its products in the Middle East is the first step to realize its global blueprint. Lucien Liu, a manager from Blackview has revealed that the company will initially launch six smart devices — Tab 11, Tab 6, Tab 6 Kids, A95, A55 Pro and Tab 12 in the Middle East.

Blackview Tab 11 is the first-ever Widevine L1-certified Blackview tablet that renders boundless HD visual joy on Netflix, and can also be used as a large-sized smartphone and small-sized laptop. In a smart device market that mainly focuses on younger users, Blackview does not neglect the needs of children and the elderly with products like Tab 6 and Tab 6 Kids. The former is an 8” tablet suitable for students and the elderly that can be used as a large-sized phone, mini-tablet and large kindle for convenient reading, while the latter is designed for the inclusive use of young children.

In addition, Blackview A95 is made for people who have high standards for aesthetic smartphones. Furthermore, Blackview’s latest mainstream smartphone, the A55 Pro, has a long-lasting mega battery and jaw-dropping new memory expansion technology with RAM expansion of up to 7GB.

Blackview smartphones are equipped with night vision cameras that allow day-like clear sight at night and thermal imaging cameras that make temperature detection possible anywhere. These cameras can deal with unexpected blackouts at night or accidental fires, offering protection against danger especially for the elderly and children. Blackview has also customized the designs of its smartphones based on the cultural uniqueness of the Middle East, adapting them to the perception of beauty of Middle East users. Affordability is the biggest highlight since Blackview has taken bold steps to lower its prices further, making its smart devices more affordable for most Middle East buyers.

Blackview began as a military-grade rugged phone company and after 9 years of development, its product line-up has now expanded to cover mainstream smartphones, tablets, laptops, smartwatches and earphones. According to IDC, the brand has ranked fourth in the rugged phone market in Europe in Q3 of 2021. The company has maintained more than 30% of sales growth for 8 consecutive years, selling hundreds of million units worldwide.

Global beauty brand’s collaboration with online platform City Walks aims to turn men into allies through direct experience of the female perspective SINGAPORE – Media OutReach – 25 August 2021 – Unilever beauty brand, LUX, is launching a campaign to highlight the impact of casual sexism faced by women in their everyday lives by inviting men to experience it […]

SHENZHEN, China, Sept. 29, 2021 /PRNewswire/ — Blackview has recently launched the BV6600 Pro and Blackview BL5000. For people who spend the most time outdoors—whether for work or play—it’s a big problem for average cell phones. Standard phones can’t stand continued exposure to dirt, dust, water, or extreme weather well, and could easily break as […]