Skip to content
Home Press Release CGTN: How does Xi Jinping express gratitude and love to his mother?

BEIJING, May 8, 2021 /PRNewswire/ — As International Mother’s Day, an important occasion that falls on the second Sunday of May every year, will be celebrated on May 9 this year, the media started reporting moving stories about mothers and children.

Among the stories, Xi Jinping’s stands out as he is not only a son but also the president of China.

How does the president express gratitude and love to his mother? Xi’s way can be figured out when he stressed the importance of family bonds and family love and emphasized family education on many occasions. 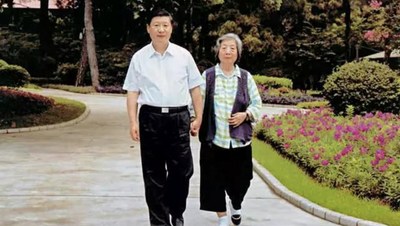 When President Xi delivered his first New Year address in 2013, photos placed on his bookshelves caught the online community’s attention, especially the image of him walking hand in hand with his mother.

Xi is a filial son. He chats with his mother Qi Xin, and takes a walk with her whenever he has time.

While meeting with representatives to the first National Conference of Model Families in December 2016, Xi told a story about family education. The conference was the first of its kind to honor model families selected nationwide. A total of 300 model families were honored.

“When I was a child, my mother gave me a picture-story book series－’The Legend of Yue Fei.’ One of its more than 10 volumes shows Yue Fei’s mother tattooing four characters saying ‘serve the country with the utmost loyalty’ across his back,” Xi said, adding that the story of Yue Fei, a well-known ancient military figure fighting against invasion, deeply impressed him.

Qi led a simple life, which became a tradition for the family. No matter how painstaking to take care of the family while working, she never compromised her work. Her lifestyle and the family atmosphere guided Xi’s values.

“A person who failed to be incorruptible and self-disciplined will become a person with no guts. Keep in mind that honesty is a blessing and greed is a curse while establishing a correct view of power, status, and interests,” Qi once wrote in a letter to Xi, reminding him of self-discipline. Xi has incorporated these beliefs into his ideology and governance practices.

Calling corruption the “biggest” risk to the Party’s governance, Xi has stressed there is “no alternative” but to fight corruption against all odds and called for rigorous self-discipline within the Party.

While going after corrupt officials, including both high-ranking “tigers” to lower-level “flies” on the domestic front, Beijing has also carried out such operations as “Sky Net” and “Fox Hunt” to hunt down venal officials who have fled abroad.