SHENZHEN, China, Aug. 23, 2019 /PRNewswire/ — On the afternoon of August 1, HOHO, an Egyptian electrical appliance company, and KONKA, a leading Chinese home appliance company, established cooperative relationship at Four Seasons Hotel, Cairo, in a bid to establish a joint venture company to expand their operations in the African market with concerted efforts. Former Prime Minister of Egypt, the Counsellor of the Chinese Embassy in Egypt, the Secretary-General of the Cairo Chamber of Commerce and main partners of KONKA in Egypt were present at the event. 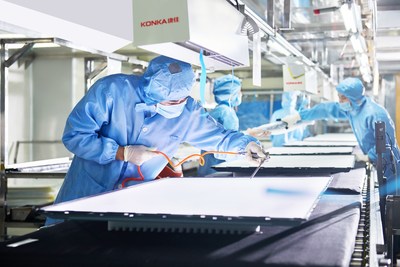 At present, China’s color TV market is experiencing a slowdown. As a populous country in the Middle East and Africa, Egypt, boasting its fast-growing market and low labor costs, has drawn the attention of many Chinese home appliance companies. However, KONKA adopts a new model of localized operation this time, quickly opening up the local market with HOHO’s mature industrial production qualification and sales network. “A differentiated development strategy serves as the greatest value for KONKA to step into African market and spread its wings,” said Chang Dong, Assistant President of KONKA Group Co., Ltd..

KONKA is not just eyeing the Egyptian market, but also other major markets in Africa. The joint venture is capable of manufacturing more than 50% of featured products locally. When the market operations and development get stable, KONKA’s influence may be further spread to the Middle East, Africa and even Euro-American region.

SEATTLE, Jan. 27, 2021 /PRNewswire/ — Today, Bill and Melinda Gates share their 2021 Annual Letter, “The Year Global Health Went Local.” In this year’s letter, Bill and Melinda reflect on the worldwide impact of COVID-19 and the global collaboration and scientific innovation fueling one of the largest public health efforts in history. They share […]