Under the patronage of his Highness Sheikh Tamim Bin Hamad Al-Thani, Emir of The State of Qatar, and Her Excellency Ms. Audrey Azouly, Director-General of UNESCO

Following its highly successful showcase at the Grandmaster’s Palace in Valletta, The Majlis – Cultures in Dialogue, a traveling cross-cultural exhibition organised at the initiative of the Sheikh Faisal bin Qassim Al-Thani Museum – that features a collection of a unique assembly of artefacts reflecting the interaction of civilizations in the past while encouraging dialogue in the present – raised its curtains to welcome more than 200 VIP guests on 29th November at UNESCO Headquarters – Paris, taking the audience’s delight to a new height with a specially composed song ‘Cultures In Dialogue’, by the legendary female Qatari composer Dana Al Fardan. 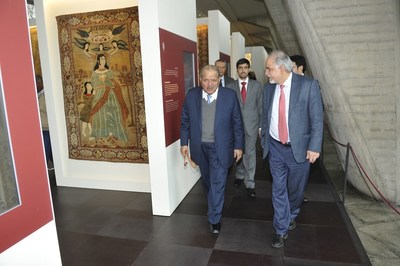 Preceding the inauguration delegates’ speeches, VIP guests had the opportunity to view the astonishing and exceptional collection that bear witness to hundreds of years of intercultural dialogue and interaction of civilizations, through a guided tour around the exhibition. Objects of great beauty and deep fascination including Chinese Qurans, mosque lamps made in Vienna, Persian carpets with Russian texts featuring the Virgin Mary, and mystic artefacts shared from Africa across the Arab world to India, were the prime highlights, triggering a diversification of thoughts and emotions.

H.E. Sheikh Faisal Bin Qassim Al Thani and Mr. Xing Qu addressed government, cultural and corporate representatives from Qatar and France with warm welcoming words, as they celebrated the opening of the exhibition at UNESCO Headquarters in Paris.

Showcasing an exceptional collection, the exhibition intends to drive visitors to sit in the majlis to listen to stories and engage in conversations on what they see; transmitting the cultural dialogue by exchanging their impressions of the exhibition and learning about other cultures and religions at first hand.

This diverse cultural exhibition recreates the atmosphere of the majlis-the space of hospitality and dialogue present in homes throughout the Arabian Gulf-offering guests the opportunity to exchange ideas about how much common ground exists between different cultures, and how these commonalities have been expressed in technology, art and culture.

“We are overwhelmed to receive such a stupendous response for “Majlis – Cultures in Dialogue” event in Paris. The city is known to be a connoisseur of global art & culture and the success of this event very well resonates with its inherent philosophy of spreading peace by way of artefacts, handicrafts, arts and songs. By taking this event to various parts of the globe, we intent to spread the message of hope and positivity, by way of breath-taking artistic displays, to the global canvas and encourage visitors to respond to what they see by sharing their own stories, creating dialogue between East and West, between young and old, within a real Majlis seating.”

“The Majlis – Cultures in Dialogue in Paris truly exemplifies how art can perfectly play the role of a critical enabler in building bilateral ties. In sync with the philosophy that Museums play a decisive role in strengthening the creative economy locally and regionally, we take immense pride in associating with this noble cause and such an exemplary initiative. In the future too, we will keep associating with such endeavors which support our objective of fostering social cohesion, among local communities and disadvantages groups.”

The exhibition is only the beginning of a much bigger project to connect people, beliefs and cultures by creating opportunities for respectful, yet incisive dialogues to take place. The project envisions to create a platform where relevant cultural aspects can be discussed, and original perspectives can be generated through collective thinking. The aim is to initiate meaningful connections between people and cultures and stimulate enriched dialogue around the world.

The Majlis – Cultures in Dialogue is a visitor’s experience that reveals how global perspectives can vary depending on the position of the viewer. Following Paris, the exhibition will visit several countries, including Austria, Germany, Spain, Turkey, and the UK. The tour will also include the United States by 2021. The cross-cultural traveling exhibition is bound to make its next stop at the Insitut Du Monde Arabe, in Paris, where it will last for a 2-month period.