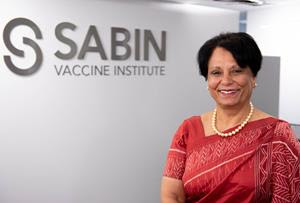 Gupta comes to Sabin after eight years with Gavi, the Vaccine Alliance, where she served as Deputy CEO and led efforts to center policies, programs and partnerships around vaccine equity, gender and communities. She also pioneered the concept of zero-dose children – those who have not received a single dose of the most basic vaccines – and drove efforts to create a new model of country-level partnerships.

“Anuradha Gupta is a stellar addition to Sabin’s executive management team at a time when vaccine access and equity, as well as misinformation, remain enormous challenges worldwide,” said Sabin CEO Amy Finan. “Anuradha’s visionary approach, expertise, and deep commitment to those we serve will help move the needle for global vaccination rates.”

Gupta said she’s excited for her role and will use her extensive experience to advance innovative approaches to improve vaccine access and uptake. “This is a watershed moment for immunization, and we must ensure that vaccines remain front and center on the global public health agenda,” said Gupta. “There’s still so much to be done to introduce, scale up and universalize the full range of vaccines, and Sabin will be a powerful catalyst for this critically important work.”

A recent United Nations report noted that in 2021, 25 million babies missed out on one or more doses of routine vaccinations for diseases such as measles, diphtheria, and whooping cough. Nearly 18 million of those children, many in low-income countries, were zero-dose, making them more vulnerable to deadly and debilitating infectious diseases, and also, spurring fears of diseases such as polio and measles reemerging in non-endemic countries.

“Fighting and finishing polio in India with an oral vaccine developed by Dr. Sabin is an unforgettable part of my public health journey,” Gupta recalls. “So, I am delighted to join an institution that is dedicated to advancing Dr. Sabin’s legacy by harnessing the full power of vaccines to save lives.”

Under Gupta’s leadership, Gavi won many accolades and rolled out a new framework for partner engagement that has helped bolster country ownership of Gavi-supported programs and improved accountability for results. Those achievements contributed to Gavi receiving the prestigious Lasker-Bloomberg Public Service Award in 2019 for providing sustained access to childhood vaccines in the world’s poorest countries.

“Her willingness to expand the tent to include global players from various sectors is laudable and has measurably improved outcomes in many of these countries,” said Dr. Regina Rabinovich, MD, MPH, chair of the Sabin Board of Trustees. “Anuradha’s work exemplifies Sabin’s commitment to champion evidence-based solutions for immunization in low and middle-income countries and to build partnerships delivering lasting impact in these places.”

Gupta’s most recent initiative to focus on children who have not received a single shot is audacious for its ambition and scope. She was the guiding force behind Gavi’s $500 million Equity Accelerator Fund which includes an innovative program aimed at reaching zero-dose children in conflict zones and drought-afflicted areas in the Sahel region and the Horn of Africa.

Gupta pointed out that children who had been deprived of a single shot accounted for half of vaccine-preventable deaths and that targeting this population could be a game changer for reducing disease outbreaks and improving overall health security.

“These children live in communities that often face multiple deprivations so we must find a way to connect them to their first shot otherwise they miss their shot at a healthy future,” she said. “The Zero Dose Immunization concept goes beyond routine vaccines to connect families to other critical health care and humanitarian services, in consultation with communities, governments and other key groups.”

Prior to Gavi, Gupta served as Mission Director of the National Health Mission of India where she played a leading role in India’s efforts to eradicate polio, reduce maternal and child mortality, bring down fertility rates and revitalize primary health care. She served as a member of the Steering Committee for Child Survival Call to Action, co-chaired the Stakeholder Group for the 2012 London Summit on Family Planning and was a member of the Family Planning 2020 Reference Group.

Gupta holds an MBA from the University of Wollongong in Australia and received executive education from the John F. Kennedy School of Government at Harvard University, Stanford Graduate School of Business and Maxwell School of Citizenship and Public Affairs at Syracuse University. In 2015, she was named one of “300 Women Leaders in Global Health” by the Global Health Centre of the Graduate Institute of International and Development Studies. She was profiled among the ten most influential women IAS officers in a recently released book – the Indian Administrative Services or IAS as it’s commonly called is India’s preeminent civil service.

In 2021, Gupta received the University of Wollongong’s Alumni Award for Social Impact. She was also conferred the highest civilian award for public service by the President of the Democratic Republic of the Congo and the Cross of Labour by the President of Laos for contributions to the health of the people in that country. In September 2022, she was awarded the Advance Global Australian Award, in recognition of the global impact of her many accomplishments.

About the Sabin Vaccine Institute

The Sabin Vaccine Institute is a leading advocate for expanding vaccine access and uptake globally, advancing vaccine research and development, and amplifying vaccine knowledge and innovation. Unlocking the potential of vaccines through partnership, Sabin has built a robust ecosystem of funders, innovators, implementers, practitioners, policy makers and public stakeholders to advance its vision of a future free from preventable diseases. As a non-profit with more than two decades of experience, Sabin is committed to finding solutions that last and extending the full benefits of vaccines to all people, regardless of who they are or where they live. At Sabin, we believe in the power of vaccines to change the world.

A photo accompanying this announcement is available at https://www.globenewswire.com/NewsRoom/AttachmentNg/a2bfd118-42e2-4ff5-b2c1-92fd13e316cf